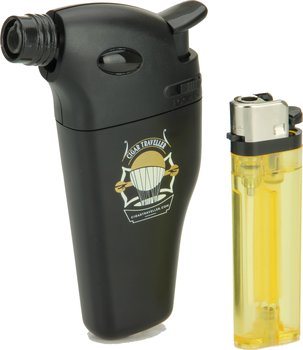 5 (1 Rating)
$52
plus shipping
Availability: Immediately / in stock Receive it within 5-8 working days
Travelling with cigars and accessories can often be a frustrating experience, especially for those travelling by air. Stricter regulations implemented in airports throughout the World have made it particularly difficult to carry a quality cigar lighter. Cigar Traveller Lighter to Jet Flame Converter does away with the inconvenience of lost or confiscated lighters, giving you a safe keep high-powered flame action at the ready no matter where you go.

The Cigar Traveller converter is a simple, yet wonderfully effective device that accepts a separate fuel cartridge instead of having an onboard fuel tank. Since the ignition system and the fuel are independent of each other, it means that you can store the converter and the cartridge separately to comply with standard airport security rules.

When you are ready to spark up, simply drop in the fuel cartridge and close the converter. You’ll have a wind-proof torch flame instantly at your fingertips. Not only does this gadget deliver a jet-flame ideal for cigars, yet it is also water-resistant, so you won’t have to worry about being caught out in the rain. For added peace of mind, the converter even has a child-proof lock.

With all of these features built into its efficient design, the Cigar Traveller Lighter to Jet Flame Converter is an absolute must for the active cigar enthusiast. Don’t settle for inferior flame while on the move, use a Cigar Traveller instead.

It works as advertised, and the surprise is that compared to the other three jets lighters, it lasts way longer and with almost the same result. I only consumed half the reservoir, smoking around ten big cigars in my vacation, with plenty of relighting. I surely recommend it!